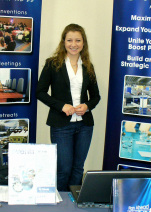 I am a proud Titan, having graduated from CSU Fullerton with a BA in Communications and  Business Administration. I currently work at Branding Personality, a digital marketing agency in Fullerton, as an account manager.

Some of my SUCCESS stories:
1. Managed fully integrated #PartyLikeAGerman 2013 Oktoberfest campaign for the Phoenix Club in Anaheim. Exceeded goal of surpassing 2012 and 2011 numbers and celebrated the most successful Oktoberfest in the club's 51-year history, increasing revenue by 35% to $1 million and visitors by 13% to 33K.

3. Increased Goodwill of Orange County’s Facebook likes from 700 to 20,000 in 10 months, utilizing cross-promotion and promoted posts/ads on a large budget scale, while always keeping active engagement of fans around 20%. I also managed the selection of a group of brand ambassadors and planned and executed a media event, which resulted in 283,000 immediate media impressions.


How can I help enhance your brand or raise awareness for your cause? Let me bring my creative touch and media connections to achieve your goals. Contact me today!

© All materials on this website are written and owned by the author, Anne Pelczar. Copying allowed with written permission only.